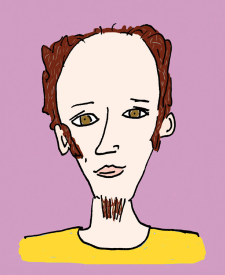 Gilles Eduar was born in São Paulo, in 1958. He graduated in Architecture from the University of São Paulo. He is a musician, writer, painter, an author and illustrator. He always loved to draw. He was a teenager when he started to write, and, at that time, he discovered the surrealist poetry of Robert Desnos (1900-1945). He started his music studies when he was seventeen; he plays clarinet and saxophone.

During the ‘80s, he played in a Band called Zero and in Luni Band, and he also had participated in the theater group Lili W. In 1988, he published his first book of poetry, Olhar Etrusco | Etruscan Look. In the decade of the ‘90s, he moved to France where he discovered children’s literature. He lived for ten years in Europe. He has published as an author and illustrator more than 15 titles with the French Publisher Albin Michel Jeunesse, and his books have been translated into more than 10 languages.

He returned to Brazil in 2000 and, since then, he has had his work published by Companhia das Letrinhas, WMF Martins Fontes, Jujuba, Ática, Laranja Original, Ameli and Bayard (France). In 2008, he received the Jabuti Award with the book Alfabeto de Histórias | Alphabet of Histories and, in 2019, the Fnlij Award, granted by Fundação Nacional do Livro Infantil e Juvenil, for the book História da Terra 100 Palavras.
At the moment, he works in visual arts and gives seminar and workshops on visual narratives and creative processes. Whenever possible, he dedicates himself to music. In 2019, celebrating 35 years of work, he launched his second book for adults, Pequenas Histórias de Amor e Morte | Little Histories of Love and Death, and performed an exhibition of painting Tantos Mundus with the curatorship of Renato de Cara.

In 2020|21, during the pandemic, he has dedicated himself to building the site and has written six books, three of them were distributed to thousands of readers at their homes.

Or, if you prefer, please write to gilles@gilleseduar.art